Grand Tour #33; Looking at a submarine disaster with your Children.

Getting in a train and going to another country under the sea should be fun. Right?

We got up early. Too early. For a three hour drive to Calais. Cormac was fairly unimpressed. 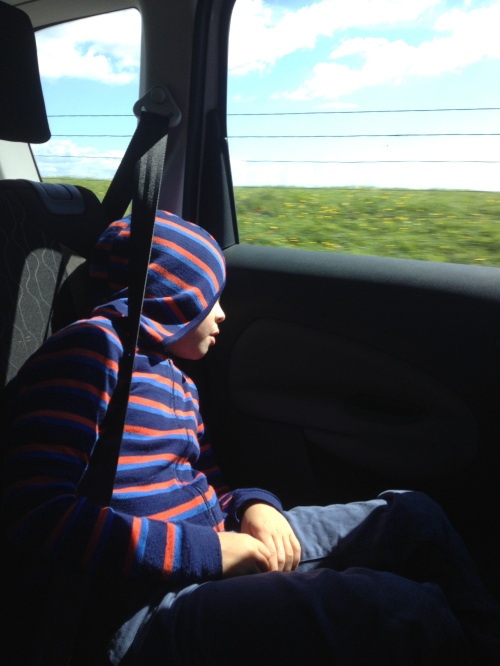 We arrived at Calais and Le Shuttle. We were transported to another world. Not by the train but by the masses of refugees trying to somehow get to England. These are the people that are taking incredible risks to get across, or under, the English Channel.

I don’t understand how anyone would not find this sort of thing confronting.

There’s a young man. He is right in front of you, as the traffic crawls along, trying the back door of a refrigerated container on a slow moving truck. If he stumbles you might drive over him. If he can’t get in he will try another. If he gets in he might freeze to death. Or get asphyxiated if the dozens of other men on the road side manage to get in the same container.

Cue groans. The kids don’t groan. In fact I never said the above sentence. They asked. Who? What? Why? How? Where to? Why again?

How do you explain such a thing to an 8 year old boy and a 10 year old girl?

I wonder if people, those that swallow the right wing anti-immigration rubbish that’s trotted out by the Murdoch press, and associated puppets and politicians, find that rubbish still works for them as they struggle to deliver a coherent explanation to their kids.

It didn’t sound very fair to my kids. Maybe thats how things like this should be assessed?

Getting in a train and going to another country under the sea should be fun.

But it wasn’t. We got past the refugees. We went through the armed police checkpoints. We sat in a queue of cars. We watched a light go green. A man waved. We rolled down a ramp and drove into a train carriage. That was a surreal moment but that was it. We drove down inside the train. Doors closed behind us. Announcements were made in two languages and off we went. 30 or so minutes later we drove out and we were in England. It was grey.

If we hadn’t watched a little film months before, when I was getting the kids excited about the Grand Tour, it would have been hard to convince them that we were really under the sea. With the weird fishes.