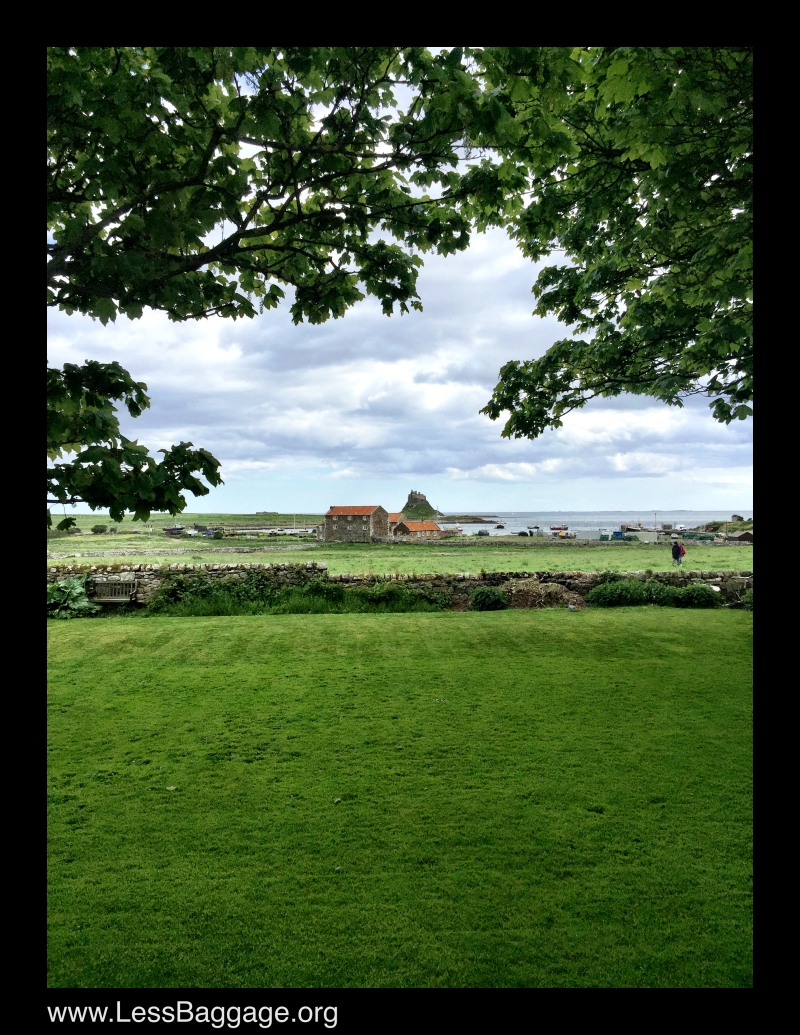 The “Holy Island of Lindisfarne”, to give it its proper name, is a little tidal island with a big history. It is reached by a causeway from the mainland not far from Berwick-Upon-Tweed. There is a lovely drive up that way from the Newcastle direction. From a kids point of view the causeway is gold. The 16th Century Castle is brilliant too. In terms of setting the scene, for a whole bunch of interesting history stuff I wanted to teach the kids, these sort of features are very helpful. Turns out that if you do fun stuff then the “road-schooling” is more fun. (Who’d’ve thunk it?) 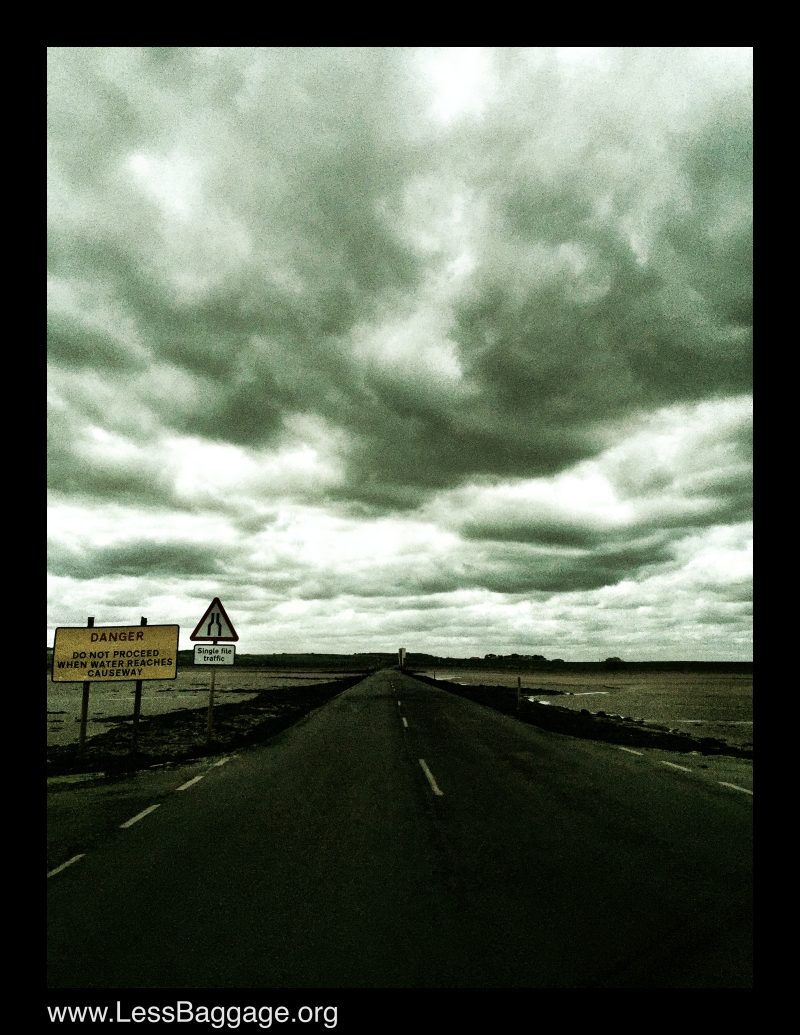 I am not a christian but you don’t need faith to appreciate the story of the Irish Saint Aidan sent from the island of Iona at the request of King Oswald way back in 635. The vast majority of the conversion of the people of the island of greater Britain was done by evangelical monks from the island of lesser Britain. (Lesser Britain is usually referred to as Ireland these days.) It was not converted by the Roman Churches mission to Canterbury under Saint Augustine. The so called Gregorian Mission (Pope Gregory the great) was more focused on the Anglo-Saxons; the product of the successful Saxon invasions of the south east of greater Britain filling the void left after the withdrawal of the faltering Roman Empire in 410 AD.

The church that had developed under the Irish influence was very different to the Roman model. It was based on Monasteries not Bishoprics. The Abbots of each Monastery were often elected by their “brothers”. The Abbots themselves were not necessarily priests or bishops. It was much more grass roots model. If an Abbott was a good leader then their Monastery would grow more successful. The Abbots occasionally convened and the representatives of the largest monastic communities would, largely speaking, hold more influence over joint decisions. It was not perfect but it was very different to the top down model of the Roman church developed within the eternal city and under the influence of the Roman Empire with its Caesars and its Senate.

The Roman Church was a far more politically astute and strategically driven institution and after successfully converting the south east the spheres of influence began to clash. The British Church had developed into a body distinct from the Irish Church. It had not however become a match for the romans. It was still primarily made up of many parts, each focussed primarily on the individual monasteries and their different interests. These interests were conversion of lay persons, feeding the greater monastic community, education, creation of manuscripts, tending the sick….. good christian stuff.

As the 19th Century Anglican Bishop of Durham summarised it:

The Roman Church was better at the bigger picture. They converted the Kings. As was repeated in the history of the Roman Church there was little space for alternative Churches. The Irish Church (sometimes referred to as Celtic Christianity) was not geared towards the politics of domination. There was no interest in fighting. Especially over the work of God. Eventually the Roman mission came to dominate not only the south but also the north. The crucial, and largely characteristic, capitulation of the non-Roman christians came at the Synod of Whitby. Curiously the grave matters upon which the Celtic Christians had to back down included how to cut your hair and when Easter should be celebrated. It was more than a symbolic climb down.

It is interesting to ponder how different things may have been. Augustine had had a poor start in Kent and even asked Pope Gregory to be allowed to return to Italy. If the Celtic Christians had been more stubborn a monastic based church may have persisted in the British Isles. Imagine how such a model would have changed the nature of the British Isles especially given its later domination of the entire globe when Britannia ruled the waves.

For me though Lindisfarne is about the Art. The Lindisfarne Gospels are some of the most important illustrated manuscripts in existence. They are beautiful amalgams of all the influences that came to bear upon the remote northern island; a reminder that in Britain the most interesting things happen when multiple cultures collide. This is in stark contrast to the paranoid racist nonsense that right wing populist manipulators so often put forward. England is great, English is great, Britain is great precisely because it has had the multiple invaders, traders, missionaries and raiders. This was the case on the 5th Century AD and it is still the case. There is nothing pure about it and that is its strength. 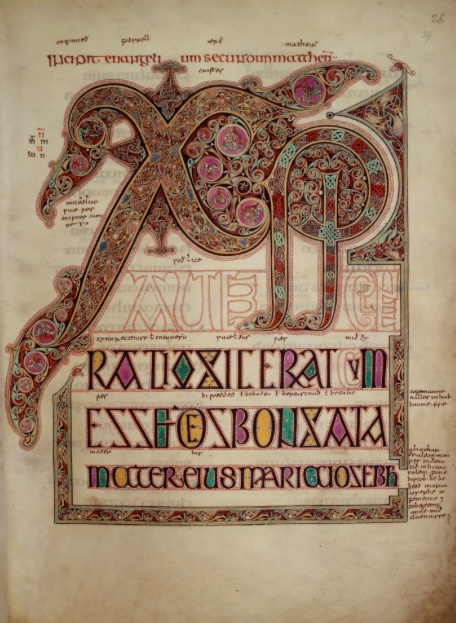 It is Northumbrian and it is Irish. It was written in Latin but it was altered in the 10th Century by Aldred. Aldred wrote a direct translation in between the original lines in Latin to create the oldest Old English Gospel in existence. It is not the only great work of Insular art but it is one of the finest. That someone “defaced” it when it was a couple of hundred years old doesn’t really detract from it at all.

There are many Art Historians that debate the finer details of the Gospels’ story. But that wasn’t going to keep my kids interested. The fact that Lindisfarne was the site of one of the earliest Viking raids is far more juicy. A bit like in the far from kid-friendly recent TV series.

That the scary Vikings literally laid hands on the Gospels and then tossed it aside, having ripped its jewelled studded silver cover off, makes this unique book more fun than almost every other book ever written.

So where is the actual book, they ask? The book itself is (controversially) in the British Library in London. That is down nearer to Augustines patch and some folks up in Northumberland are bitter about that.

8 comments on “Grand Tour #39; The Holy Island of Lindisfarne”