It’s the little things that make it special. New Zealand. South Island. Otago. Queenstown. Lake Wakatipu. Caples Track. These are big things. The South Island is just a bit too good to be true. Anyone who knows about New Zealand wants to go there whether into kayaks, paragliding, trekking, mountain climbing, skiing, packrafting, camping… I could go on. I love a good walk. I love a good loop walk. I especially love a good long multi-day, multi-terrain, self-sufficient, death-free walk with my father. No guides. No huts. No people if I can. I like people but I get plenty of them in my day job so I like a wilderness experience that’s a little bit isolated. Theres good and bad reasons. I may be betraying a snobbish silliness. “I want to go somewhere no-one else goes” and therefore mess up a place that no-one else has messed up. I have a low to no-impact approach. I gather other peoples rubbish as I go but I cannot pretend that I leave absolutely no trace. I am trying though. My father has pretty poor hearing so we pollute the environment with our necessarily loud speech. I’d like our subject matter to be private so thats another reason to get away from the busier routes. What is a busy route? In Yosemite I suspect that busy can be pretty busy but in good weather and on the busiest parts of our most recent New Zealand walk we would have seen maybe a dozen people on our busiest day.

We started along the “busy” and beautiful Caples Track from East to West. We actually started at Kinloch and walked the 12 or so kilometres to the trail head proper. This was, in itself, good fun as we could walk side by side for a while and I rather thought we would talk ourselves out so that we would be in much quieter mode when we got into the smaller tracks. We talked our way to the Greenstone Car Park near Greenstone Station. (If you ever wanted to spend it all on an idyllic farm….) We went along the Caples River and at the second bridge which leads over to the Greenstone track we crossed and went off the track, on the south of the Caples or true right of the Caples River. We found a beautiful spot to indulge my fathers need for a tent site and my need for a hammock site. 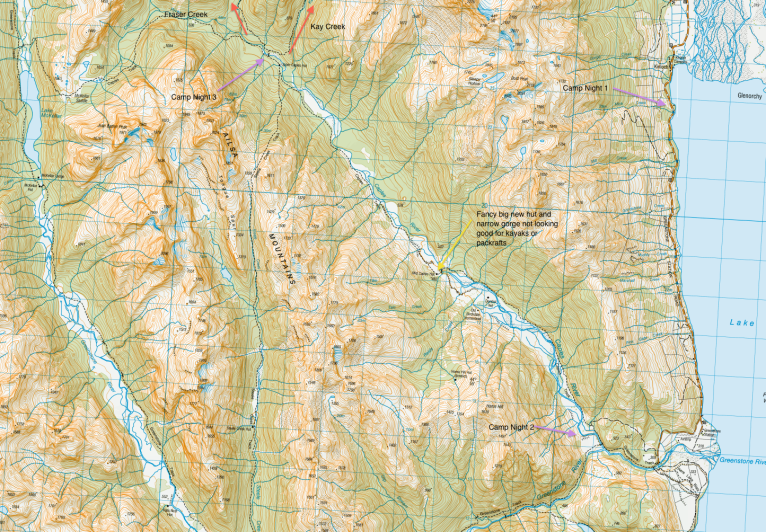 The next morning we roused ourselves and headed upstream on the true right of the Caples River. There is actually a marked route (little orange triangles) on this less walked side of the river though I only found it after we had returned to the main track on the north bank. We plodded and talked and met the odd cheerful and polite tramper. Americans, Kiwis, Aussies. We passed the Mid Caples Hut where my father did his second daily Meditation. I was trying to scout the river as we went along for a possible future pack raft trip. There is a proper little gorge just beside this Hut which looks frightening from a kayaking/packrafting point of view, even in the dry conditions. We made it to the Upper Caples Hut and the crossing to our destination; the start of the Kay Creek and Fraser Creek Tracks. If you stay in huts take note; Upper Caples Hut is no longer a government hut and is now being managed by a trekking club in Queenstown. 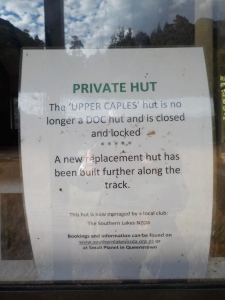 If you don’t carry a shelter then there is a excellent Bivy Rock just up the Kay Creek path about 20-30 minutes if I recall. 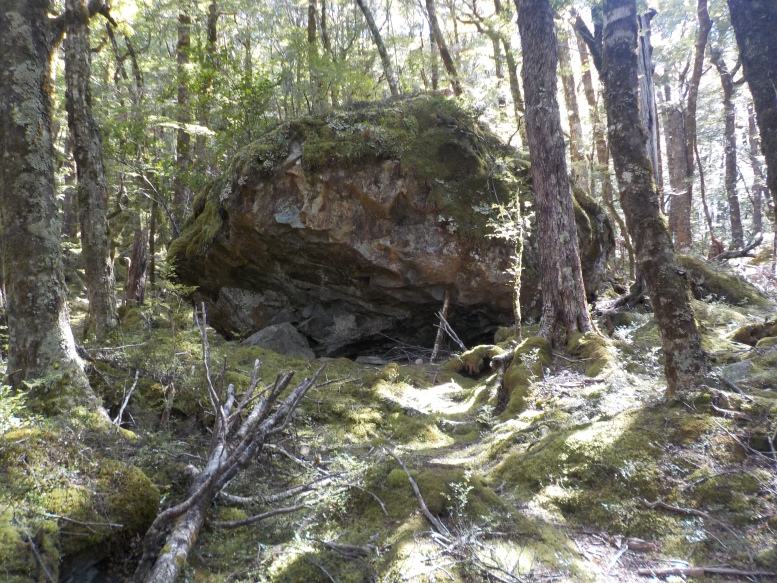 We were not camping in huts so we made our way to the river crossing and got set up. A decent bridge is to be found just up river from the Upper Caples Hut. Its an encouraging thing when the lichen grows on steel and aluminium. We had our dinner. I went for a splash in the Caples. All was good in the world. 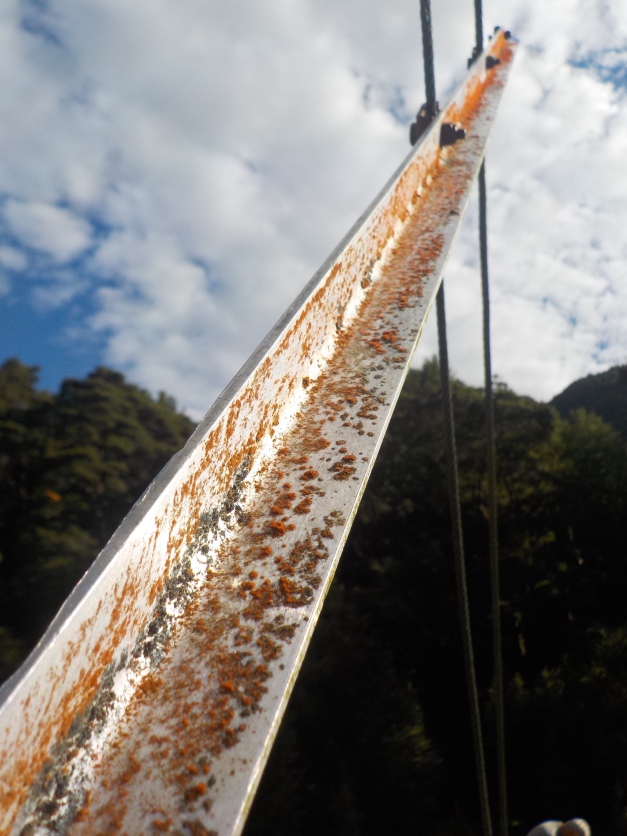 The Kay Creek Track is one of those tracks the the Department Of Conservation in NZ (DOCNZ) states that your should only attempt if you have a high degree of fitness and advance back country skills, or words to that effect. These sorts of guidelines often confuse me. I mean, I don’t rate myself as having either that degree of fitness or really that many backcountry skills. Perhaps my reference points are all wrong and its because of the sort of athlete that I rate as having these sorts of skills is off the scale. The DOC are trying to cater for all levels of walkers. Good on them. The consequences of encouraging an underprepared walker or tramper to go down the wrong track (or up the wrong creek in this case) are potentially serious. Or perhaps its all about the money and of course, being a person that works doing the rescues from these places, getting someone out of this sort of place is often impossible and always incredibly expensive. (I’ll post later on some of the insiders observations about Aeromedical Retrieval and helicopters and winches and stuff.) Maybe I am fit. Either way I would encourage people to try these side tracks out. The main thing is not to make some sort of dumb commitment to completing a track or route. Just walk up there and if it gets too hard be a grown-up and say; “mmm thats too hard” and turn around. The fact is that we are not all grown-ups and people like me have to get winched into the wilderness to pull people out who maybe shouldn’t have been where they found themselves. This walk was one that I wasn’t sure about and neither was my father so we tossed the packs in a hole and headed up Kay Creek. 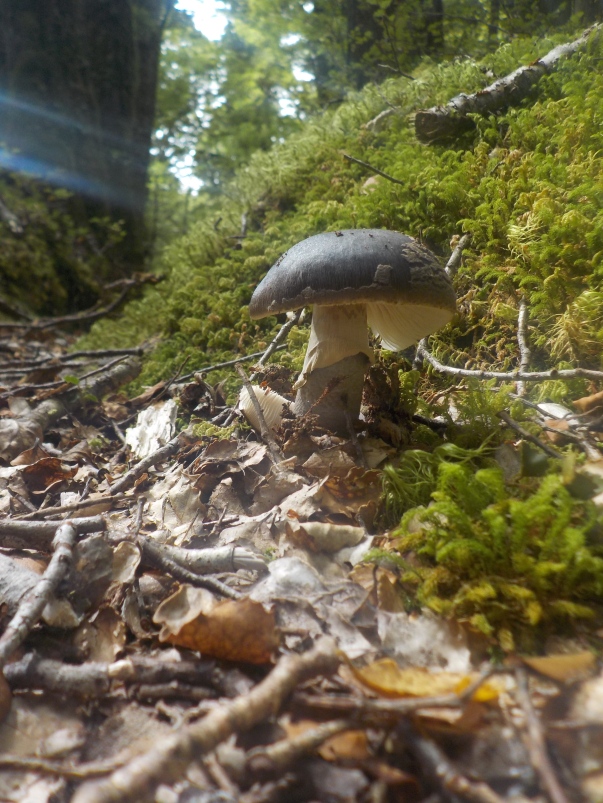 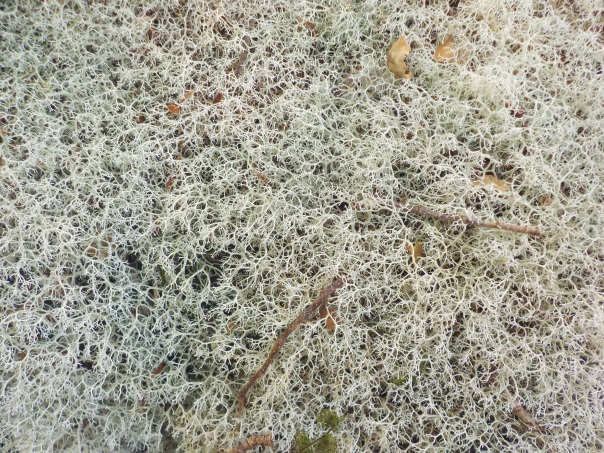 It was phenomenally beautiful. The mosses alone are enough to keep me in there for a week. Only at the beginning of the track did I discover that there is a route through to Scott Creek. I wish I had known about this. I’m sure that there are blogs or Tramping Forums that have all this information but I didn’t find them. Belatedly I found a nice report and nicer photographs of that route at SouthernAlpsPhotography; http://www.southernalpsphotography.com/Tramping/Aspiring-Region/Scott-Death-Kay/

Theres hunting going on in these hills and, while I am a vegetarian, I do respect what these guys do but I really don’t understand wanting to kill anything never mind head off into this sort of environment with a gun? Me? I’d rather talk to the trees and stare at the fungi. 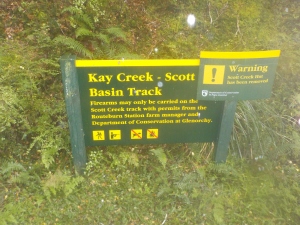 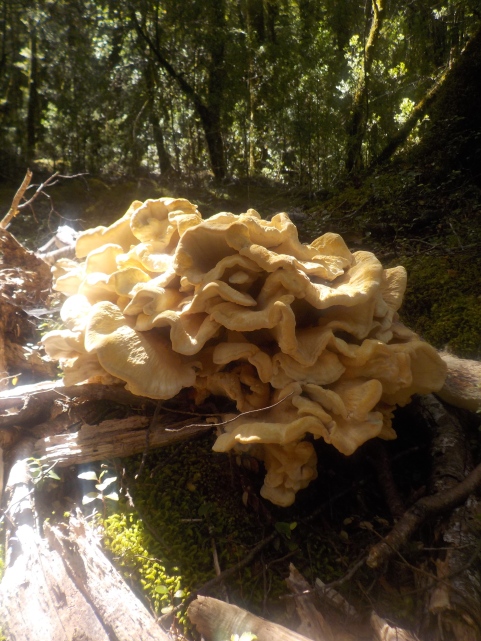 This is a slightly steep track but its well marked, and very lovely. If you’re just dropping your pack I highly recommend it for even people with modest fitness. Crossing the saddle into Death Valley is another matter. About half way up we stopped for a break; my father did his meditation and I was forced to sit still for 30 minutes. I’m beginning to wonder if i was getting more benefit from the sitting still than he was.

We didn’t make it to the hut up the Kay Creek Track but have a look at the SouthernAlpsPhotography link above before you commit yourself to a night in that one!

We marched back down the hill and grabbed our bags and (after a Hobbit Style 3rd breakfast) headed up the Fraser Creek Track. This track also has a couple of possible routes through to the Routeburn Track. I expected to find similar topography on this near parallel track but it had a totally different personality; much wetter and more sandflies on the days we were there.

The Mountain Beech Trees were still falling apart all over the place.

The day cleared up and some beautiful vistas opened up looking down the narrow part of the river gorge close to where the Fraser Creek meets the Caples River.

Above this there have been some big slips some time ago.

Everywhere was more fabulous flora and as ever very little fauna. (Maybe its those hunters?)

The track was tougher, more over grown more tree falls, especially after a the track rejoins the creek after passing over a shoulder near the start of the track. We rolled out of a tough little section of bush to find a meadow that our hearts told us to stop in. 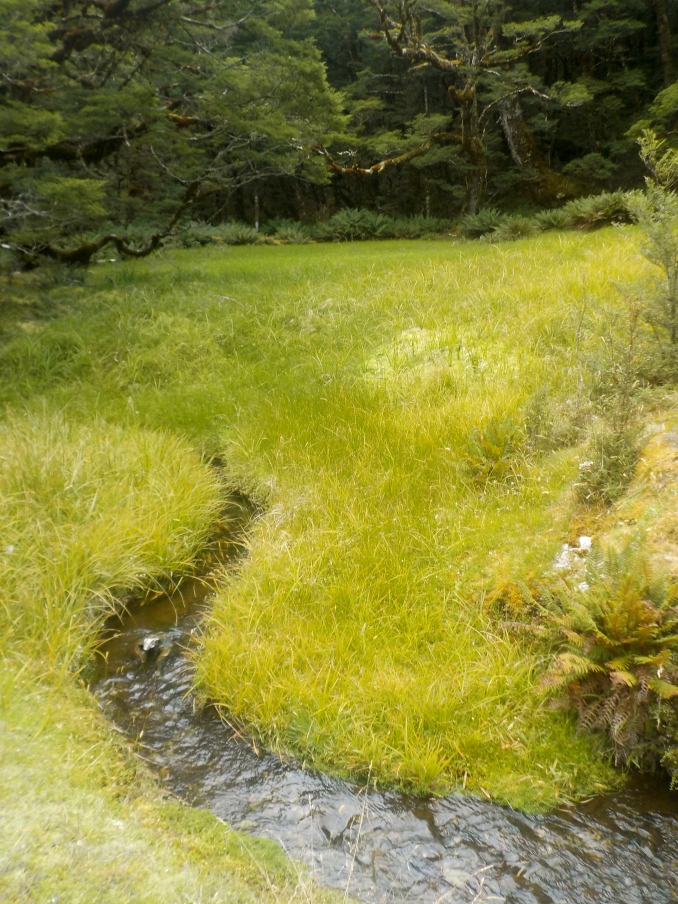 I cannot catch the magic of this place on camera, not least the $80 cheapo Nikon I brought but more on cameras later. There were ancient looking trees that stood out even in the company of the beech forests. 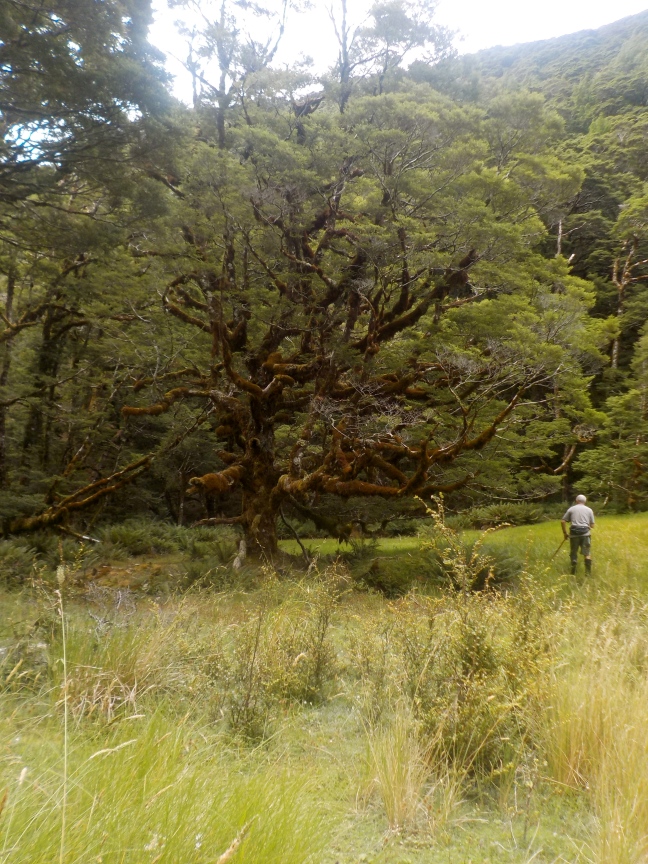 We were loving our spot and set up the Hammock and tent in the failing light. At this point we received a visitor; a lovely and very impressive woman called Lisa (i think) who was trying to complete a version of the epic Te Araroa track. This track is not part of that 3000 Klm route. Lisa was a solo hiker making her life harder by taking the more heroic options.

My father and I were both a bit blown away by the strength of this woman and her very large pack going a rather remote route over some exposed country on a very long journey.

There you have it; in the middle of nowhere we meet another walker and it was a pleasure to do so, in spite of our love of the quiet unpeopled wilderness. I love it when my preconceptions are blown out of the water like that. Though it was fortunate that she didn’t turn up 5 minutes earlier when we were both freezing our wobbly bits off having a wash after our muddy day.