Grand Tour #27 One Dozen Travel Tips for crossing continents with kids. Or “How to Fly your family around the globe and not hate everyone/everything!”

8 years ago my family tried to travel from Australia via South East Asia to Europe and suffered. It was enough to put Mrs LessBaggage off traveling to Europe for 7 years. It was a genuinely difficult one. The kids had just about reached 1 year and 3 years of age. Cormac wasn’t walking. No-one was good at sleeping. We broke the trip and had a short holiday in SE Asia after a long flight from Melbourne. We got there jet lagged and had 2 weeks of sleepless nights in Lao and Thailand. We were awful guests; kids awake and crying almost all night. Parents wired and tired and grumpy and not much fun.

When our relieved hosts in Luang Prabang said good bye we had a short flight to Bangkok, a long haul overnighter with Qantas to London and a connection to Nice. Three flights in one go. (Error.) The first flight was with Lao Airlines. (Error.) If you know you much about Lao Airlines you may know that they’ve had their problems. At the time of our last flight with Loa Airlines most Non-Governmental Organisations (NGO’s) working in Lao had forbidden their staff from flying on any of the Chinese Built Harbin Yunshuji Y 12. They had lost three of these in a short period. The NGO’s thought the Lao Airlines French built ATR 72 were okay.

We flew on the ATR. We landed safely in Bangkok. I was relieved. They have since lost an ATR (and all on board) albeit in Typhoon related weather.

We arrived in Bangkok. Our second flight was with Qantas. (Error.) My one year old son had his first genuine allergic reaction to some food in the Qantas Lounge. (Swollen lips, tongue, face etc) That settled without requiring adrenaline. The plane was delayed over 4 hours. We got to London in pieces. Not a minutes sleep for anyone yet; 35 hours and counting. Connection missed. Heathrow madness. Running in airports. (I now refuse to run in Airports.)

Flight to Nice with British Airways. (Error.) Children rancid, parents defeated. Petty British Airways Flight Crew barely tolerated. The process of asking any member of the family to do anything carried the risk of all-out no-holds-barred domestic armageddon.

Arrival Nice. Met by best friend. Now this man has known me since we were kids and he has seen me in some significantly compromising circumstances however he was in no doubt that he had never seen me look worse than I did that day. It was 42 hours since anyone had more than one hours sleep. Two weeks later I still didn’t feel like me.

We got back on the horse last year. That was okay though it did require significant reserves of effort and grace under fire.

And here we are again. It’s time to get on an overnight flight from Ho Chi Minh City to Charles de Gaulle in Paris. Almost all flights from SE Asia to Europe go overnight. I am not sure why

Why did it go fine?

We picked our flights as carefully as we could.

Our stay in Vietnam was long enough to get over any jet lag but if you are planning to stay only a few days in a stopover country I would recommend thinking of taking a daytime flight for your long haul legs; less disruptive. We did get a day time flight from Australia to Ho Chi Minh and that really did help.

We had no day time flight options for the second of the two long haul legs. However we could pick flights that arrived in Europe from very early morning to mid-morning. We went for a 06:30 arrival on a Sunday. This gives us two hours to get through the airport and better traffic into Paris.

Think a little about the immigration/customs/quarantine/security people that you will have to get past. When do their shifts start and finish? Are you better off with a tired end of night shift person or a sprightly first hour of the shift person?

On this leg we went straight to the home of relatives. We did not want them to come and meet us. They didn’t have to get up early. At least they were rested and chilled out.

They had been prepped to expect hopeless Zombies; no plans for parties or extended family.

3. Rest and Sustenance before travel.

We rested as much as we could on the days before travel.

We moved our body clocks forward a little each day and slept late on the day of departure.

We ate well before travel and brought healthy foods.

We hydrated all day before travel but slowed down in the Airport to avoid multiple visits to the horrible airplane loos.

We had the right clothes; soft, loose, non-itchy.

We had easy access to a small shared wash bag.

We had spare warm clothes and spare underclothes.

We had two sorts of reading material each; one easy and one engaging.

We switched our watches to Paris time as soon as we got on the plane.

Thus even though it was near midnight we pretended it was 6 pm. The excitement of flying etc got us through the next few hours.

6. Appropriate use of screens.

The kids hadn’t seen an english language movie for a long time and the TV on the headrest in front was allowed for one movie.

That was enough of a treat to stretch them into what would have been 3-4 am at our departure point.

We had a little stash of earphones and double-to-single and single-to-double adapters to get around any annoying sound and vision problems with the in flight entertainment system. (It is usually the earphone connection it seems.)

Cormac and I watched the same movie at exactly the same time. (It was fun getting the timing right; “3,2,1 Play!”) When it was over it was over and both TVs went off.

Lights off. Good night. Both of us.

Mrs LessBaggage did the same with Aoife.

We reserved our seats as two and two. That is I was with one child and Mrs LessBaggage with the other. Thus one parent-child combination was in two seats by the window (chosen for dawn views) and the other parent-child combination was in the two seats immediately behind. Each child had one parent. Each child had 100% attention from the allocated parent. It is curious how having two children with two parents does not allow any given child 100% attention. It seems to be an instinctual thing, the kids can want all available parental units to themselves and exclusively so. The parents can even start measuring up their spouses efforts to see if the other grown up is working as hard. Cue grumpiness.

Don’t sit together in a row of 4. Two and two. Divide and conquer. 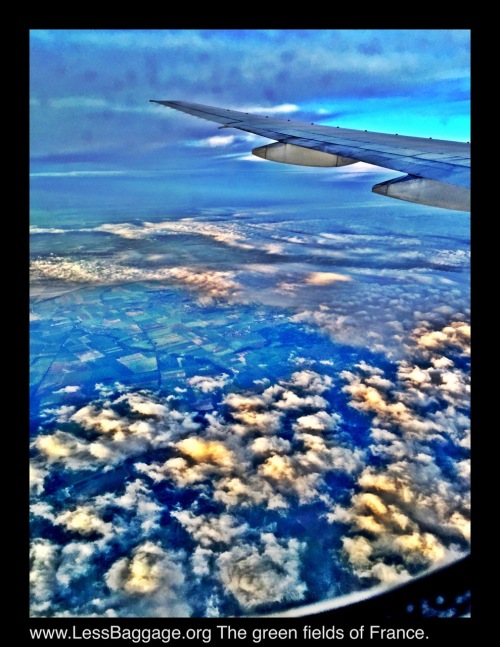 We have very little luggage (of course) so getting off and through to passport controls was a little easier.

We had researched Charles de Gaulle a little and made sure we had the address in Paris available and in French. We had it written down so that we could hand it over. (France is far from difficult in this respect but its was gold when arriving in, say, Shanghai or Guangzhou.)

We arrived at our destination with minimal extra hassles.

We sat down. We had a coffee.

The kids were allowed a second movie (in English and previously down loaded to my Lap-Top).

Meal times were kept as normal as possible.

Showers were taken when ever energy levels allowed this without causing a diplomatic incident.

We managed to stay up all day and go to bed as late as we could.

We had a couple of glasses of wine at dinner.

And finally we took some melatonin about half an hour before going to bed. (More on that later in the next post.)

I would like to think that all the sensible things we did to mitigate the harm were central to our success. Maybe they were. Maybe we just had a good day. Maybe the kids are just much better at this now. I don’t know. I do suggest you put some thought into this sort of thing. This time we sailed through it. We were not the family with the grumpy kids, the bickering parents or those people that end up fighting with the immigration service. We did not bring a damaged family unit to our hosts for them to struggle with. There were still plenty of families doing all that.

I felt for them. I felt relieved that I was not one of them.