For our first two nights in Vietnam we stayed in Hotel Majestic in Ho Chi Minh City. It was built in 1925.

It is very “cheesy” though. They seemed to try to make everything look very royal and fancy, the desks, clocks, windows, façades and chairs, which was a style called art deco.

In the morning we went to the fifth floor to have buffet breakfast. It was nice, even though they tried to have western food for most of the breakfast, but almost all the food which was Japanese, Chinese, Vietnamese, had meat or fish, and since Me and Papa are vegetarians and Cormac doesn’t eat that much meat at all, Mum was the only one who was eating that sort of food. 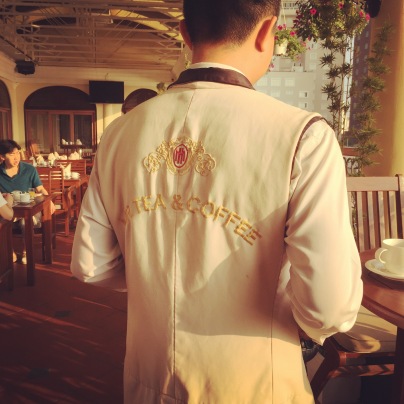 Papa’s favorite part was getting some coffee from Mr Tea & Coffee!

In the evening we went to the eighth floor for drinks. The bar was called “M-bar”. It was awesome! You had a great view or The Saigon River and all the traffic and the motorbikes.

We were all too tired to eat a full meal but we bought some mocktails and french fries.

There were photographs in frames of the Hotel Majestic over the years everywhere in the hallways.

Hotel Majestic is a historic luxury hotel, built for a local Chinese businessman in 1925 in a french style.

Another one of the interesting things about Hotel Majestic is after 1975 the hotel name was changed to Mekong Hotel, and it became a government guest house.  It has recently been changed back to it’s original hotel name.

During World War II the Japanese invaded Vietnam and took it from the French. They used the Hotel Majestic as their headquarters!

While we were staying there my favorite thing was probably the view from the M-bar, awesome!